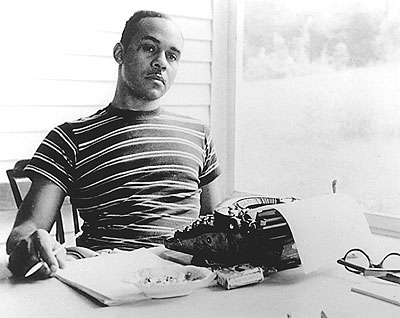 I’d like to hear five recordings of Louis Armstrong playing and singing ‘What Did I Do to Be so Black and Blue” – all at the same time. Sometimes now I listen to Louis while I have my favorite dessert of vanilla ice cream and sloe gin. I pour the red liquid over the while mound watching it glisten and the vapor rising as Louis bends that military instrument into a beam of lyrical sound. Perhaps I like Louis Armstrong because he’s made poetry out of being invisible. I think it must be because he’s unaware that he is invisible. And my own grasp of invisibility aides me to understand his music. Once when I asked for a cigarette some jokers gave me reefer, which I lighted when I got home and sat listening to my phonograph. It was a strange evening. Invisibility let me explain, gives one a slightly different sense of time, you’re never quite on the beat. Sometimes you’re ahead and sometimes behind. Instead of the swift and imperceptible flowing of time, you are aware of its nodes, those points where time stands still or from which it leaps ahead. And you slip into the breaks and look around. That’s what you hear vaguely in Louis’ music.

Once I saw a prizefighter boxing a yokel. The fighter was swift and amazingly scientific. His body was one violent flow of rapid rhythmic action. He hit the yokel a hundred times while the yokel held up his arms in stunned surprise. but suddenly the yokel, rolling about in the gale of boxing gloves, struck one blow and knocked science, speed and footwork as cold as a well-digger’s posterior. The smart money hit the canvas. The long shot got the nod. The yokel had simply stepped inside of his opponent’s sense of time. So under the spell of the reefer I discovered a new analytical way of listening to music. The unheard sounds came through, and each melodic line existed of itself, stood out clearly from all the rest, said its piece, and waited patiently for the other voices to speak. That night I found myself hearing not only in time, but in space as well. I not only entered the music but descended, like Dante, into its depths….

This site uses Akismet to reduce spam. Learn how your comment data is processed.